For the Fabcharter in the lab I am using various fablab techniques to make the sentences. For the question ‘Who can use a fab lab?’ I want LEDs in the letters to light up when you walk past.

“Ultrasonic Sensor HC-SR04 is a sensor that can measure distance. It emits an ultrasound at 40 000 Hz (40kHz) which travels through the air and if there is an object or obstacle on its path It will bounce back to the module. Considering the travel time and the speed of the sound you can calculate the distance.

Testing with Arduino and NeoPixels

I’m following this tutorial to get started with the sensor, with the schematic below as a reference; since I’m using an Arduino Pro Mini the pin-out is different for me. 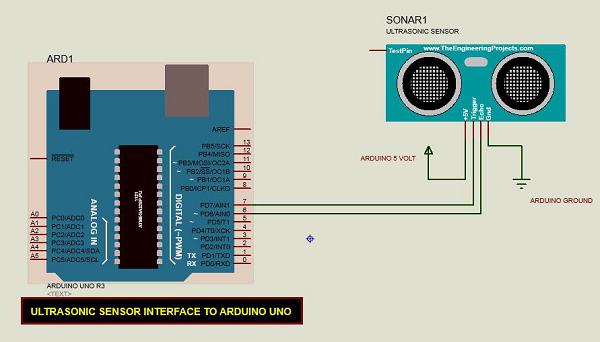 The following code is what I wrote, combining the example code from the tutorial above with a NeoPixel color wipe every time there’s movement within 50 cm of the sensor.

I want the individual words in the phrase I’m using to light up sequentially. For this I’m using arrays:

After this I wanted to use nicer colors to create more of a gradient. First I just changed the RGB values accordingly but the lights turned out way too bright, so I figured I should try HSV colors instead (also to change the hue of the gradient faster). After some trial and error with the color values my if loop ended up like this:

Before I started my own board I made a FabTinyISP. Since I’m using an ATTiny85 I have to make it to program this older chip. This board is documented here. Also check out Henk’s documentation. 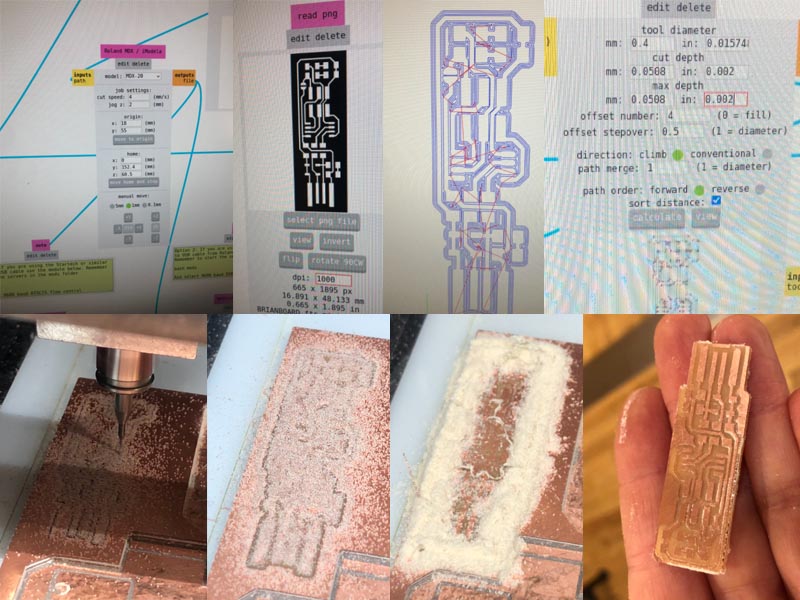 All components of the board together: 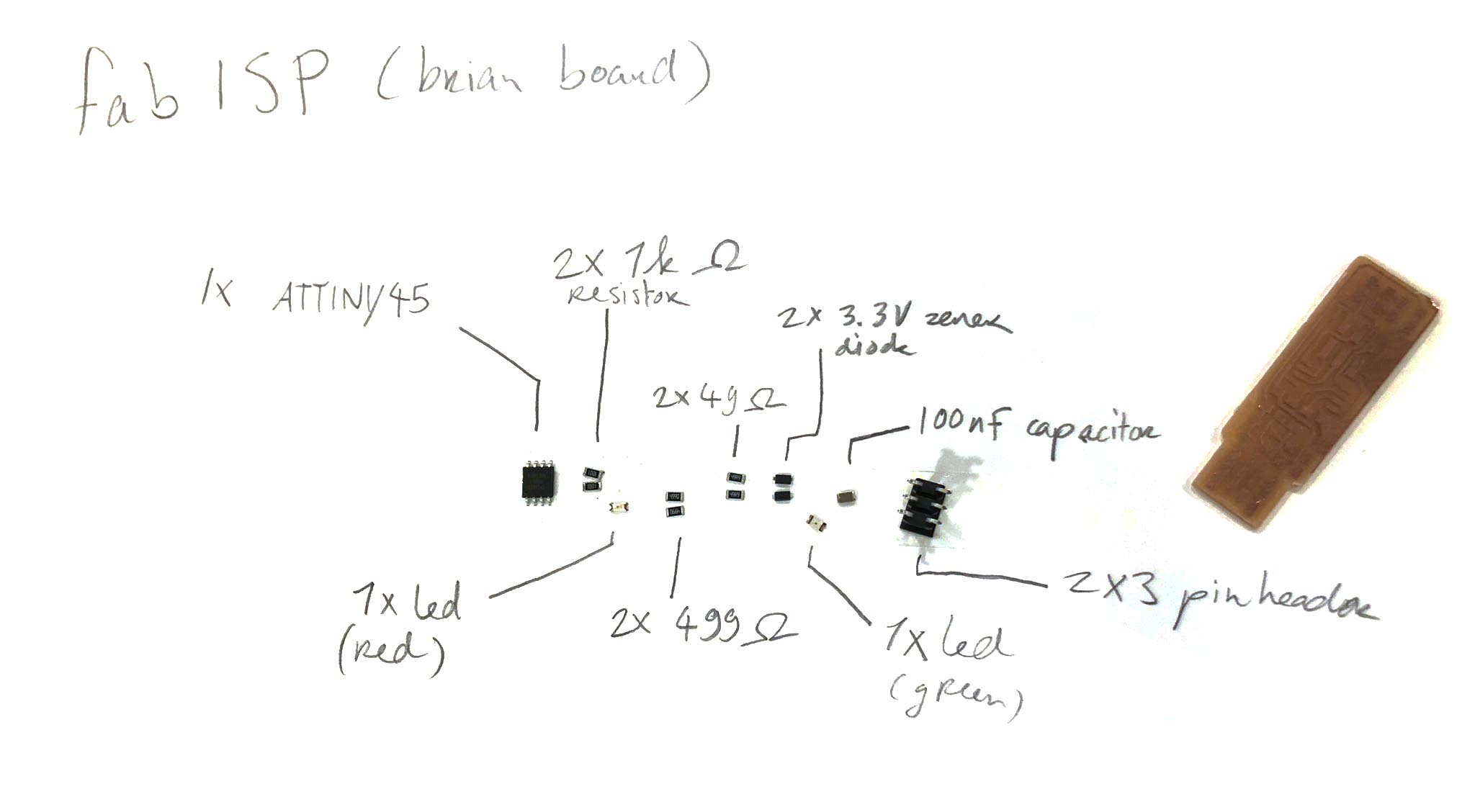 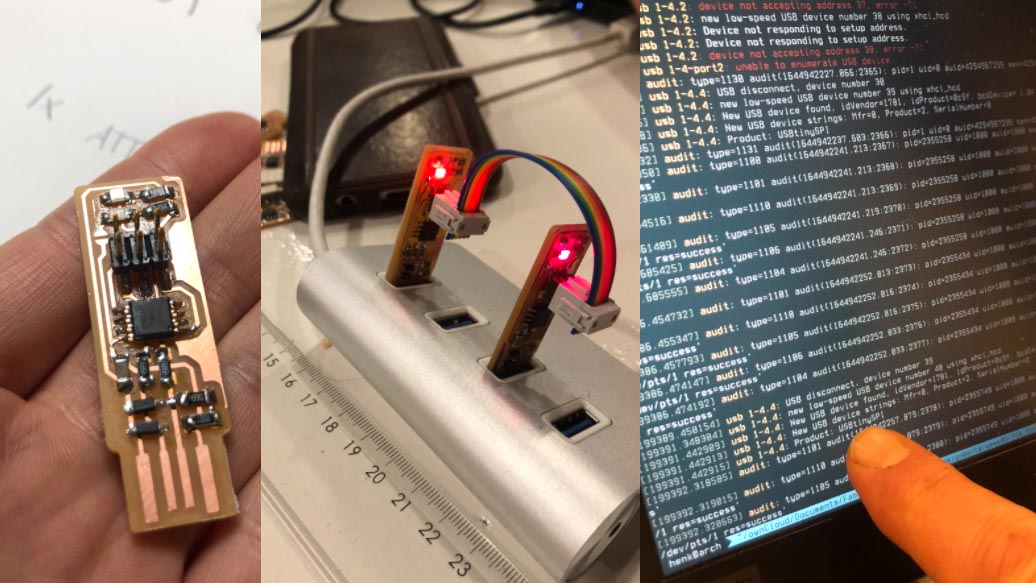 Initially I planned on using an ATTiny412 for my board but since my sketch is over 4kb that won’t work. I’m going to be using an ATTiny85 instead since it has 8kb of memory. I need 3 pins: 2 for the motion sensor and 1 for the neopixel strip. 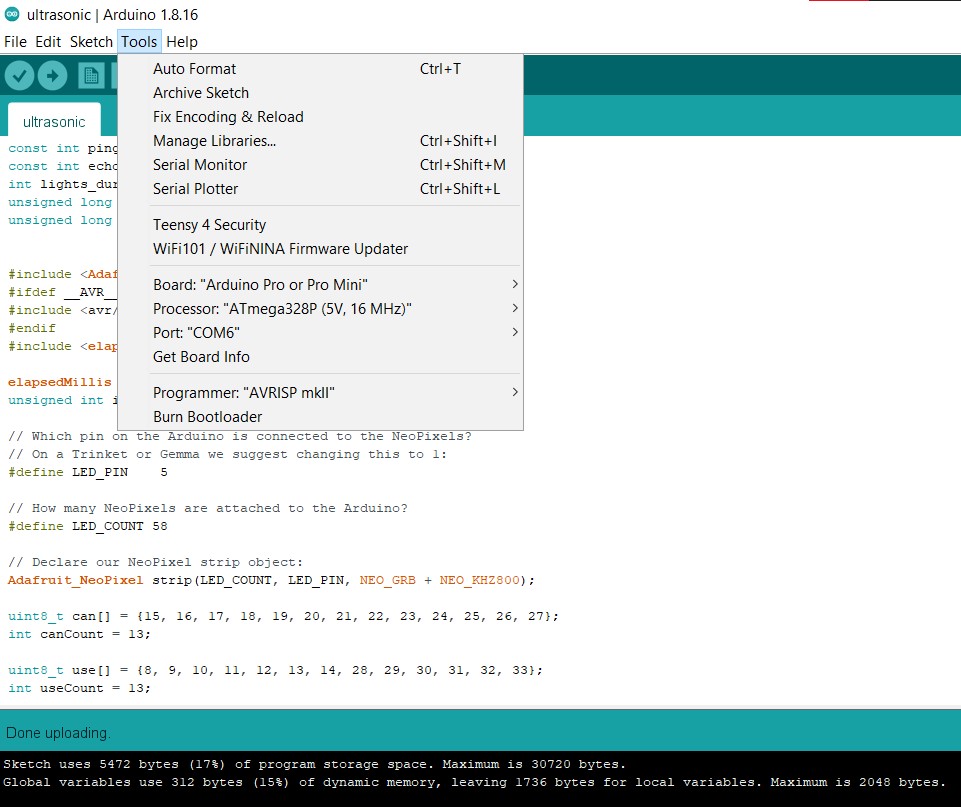 Components on the board:

Next problem: I don’t have the footprint for the ATTiny85 so I first had to find it; the one I’m using is the 20SU. I downloaded it from ultralibrarian. The footprint in the schematic looked pretty stretched but it should be OK if the actual footprint is correct.

After this struggle Henk told me the footprint for the ATTiny45 is the same as the ATTiny85 so I could just use the one from the fab library. 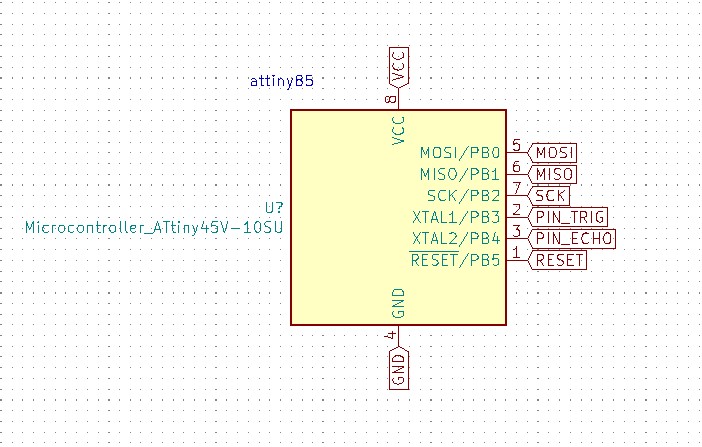 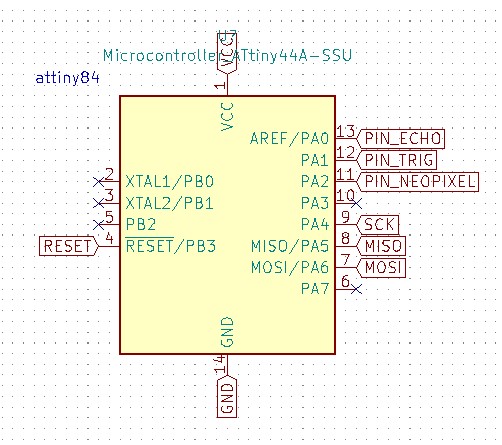 Pinout of the ATtiny84: 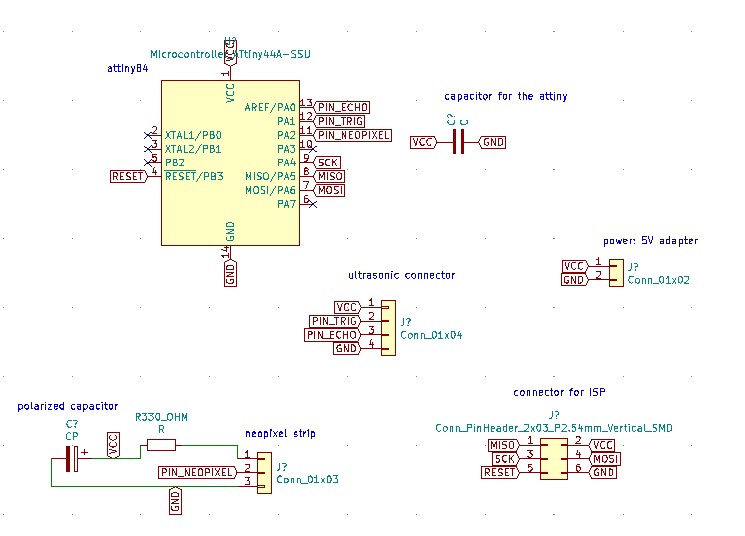 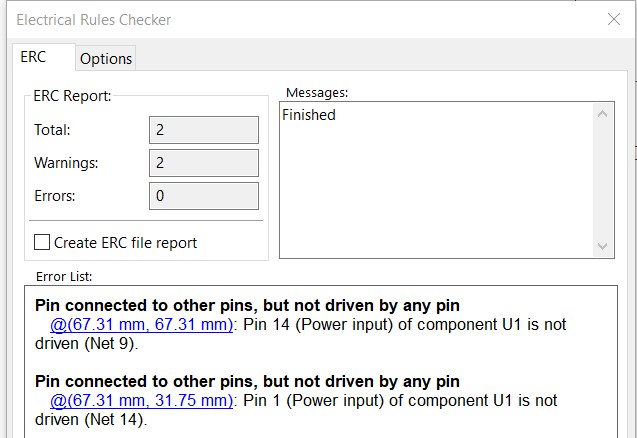 We can ignore these errors since I’m going to be powering the board with a 5V power supply.

Since I wasn’t quite sure what to do I went back to the documentation for the kicad fab library to check if I did anything wrong, and I saw that I missed that I had to make sure that I had KiCad 6 installed; I’m still running KiCad 5 so i’m first updating KiCad.

In the new version I’m walking through the steps above again where I get this electrical rules warning; I’ve replaced it now with the polarized capacitor from the fab library but I wasn’t not sure if it’s the correct one. I checked the 3d view of the pad and then I vaguely remembered that last time I connected the capacitor directly between the wires or with a through hole capacitor instead of on the board because we don’t have the polarized SMD capacitors that I need.

This time no errors with assigning the footprints, just some footprints that I have to assign manually:

The last time I added wire connectors all names were different so I picked the ones I thought would still work fine (I was looking for connectors with 0.8mm diameter holes but I could only find 0.9mm so that should also work I guess).

To quote Nadieh so I won’t forget: “Make sure that the VCC and GND of the microcontroller is connected to the point of power through the capacitor. In this case that meant placing the capacitor in between the lines going from the FTDI to the ATTiny.” 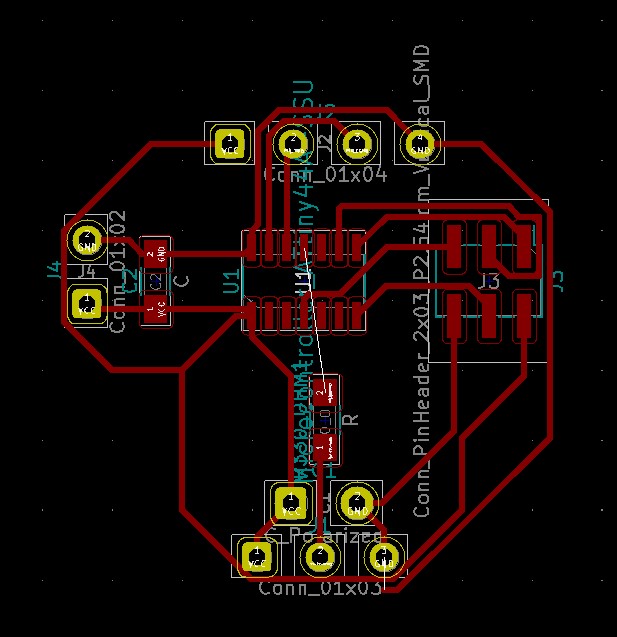 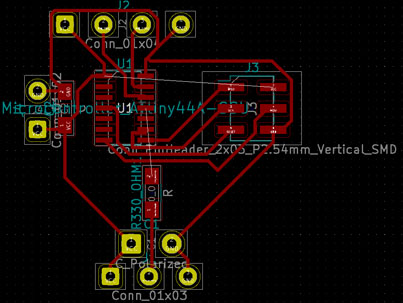 After this Henk told me I could use an electrolytic capacitor of 100uF for the neopixel (that we have in stock), so I replaced the footprint of the capacitor with that one and started over again. I couldn’t find the footprint in the fab library so I picked this one:

At this point I’ve started over many times already with manual routing, so I want to try autorouting to save me time. I’m following these steps. Download Layout Editor here, then localize the freerouting.jar file in the installed folder and start it (download Java Runtime Environment first). Make sure you exported your PCB layout to a DSN file so you can import it here. 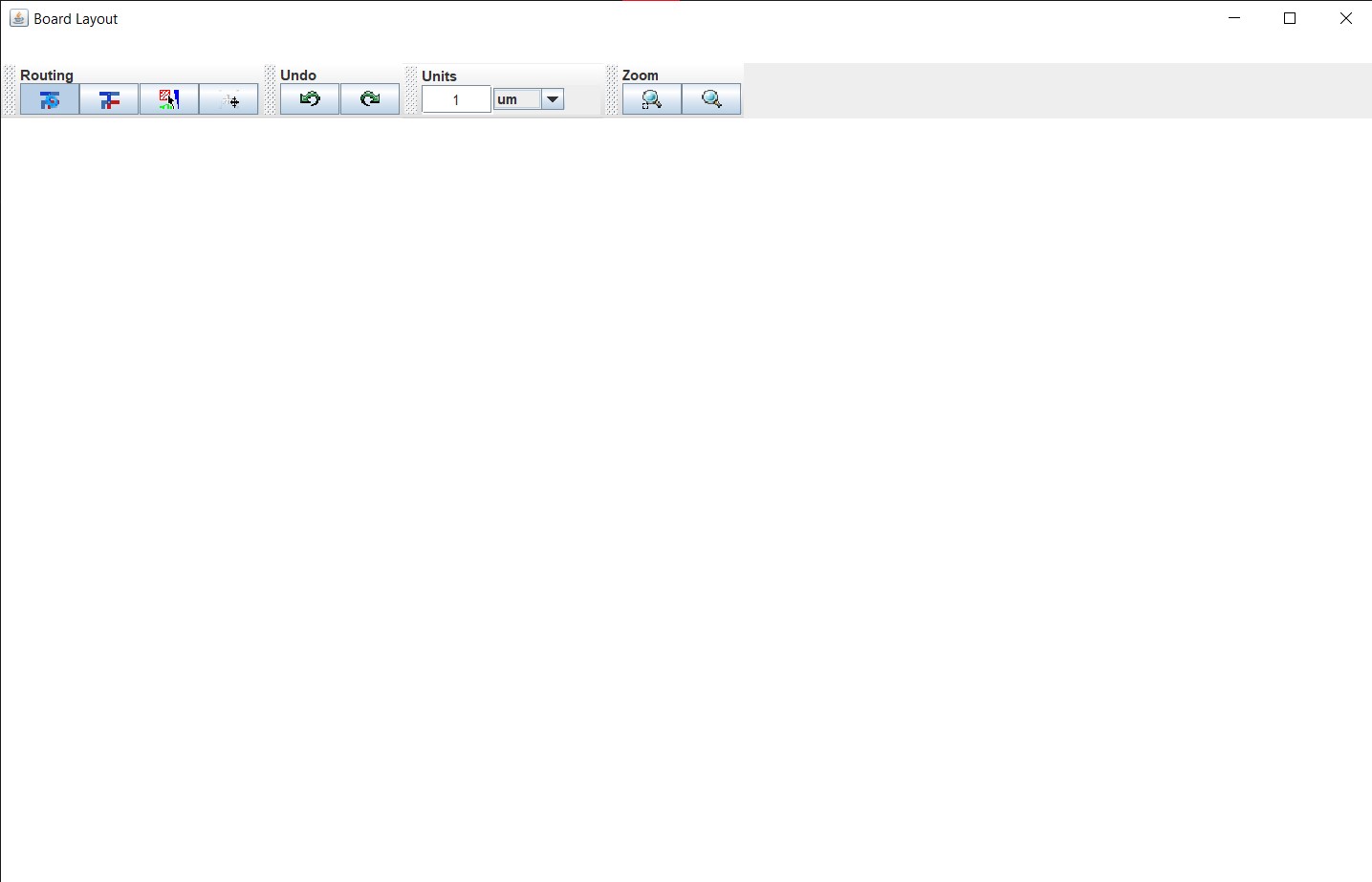 I couldn’t find out what was going wrong here after restarting and looking online, so I parked it and went back to manual routing. I got the advice to use a ground pour (make a shape, right click, create zone from selection and set it to GND), you can update it with Shift + B. In the end I managed to get everything connected but the GND in one place so I added a 0 Ohm resistor in the schematic so I could make a bridge. 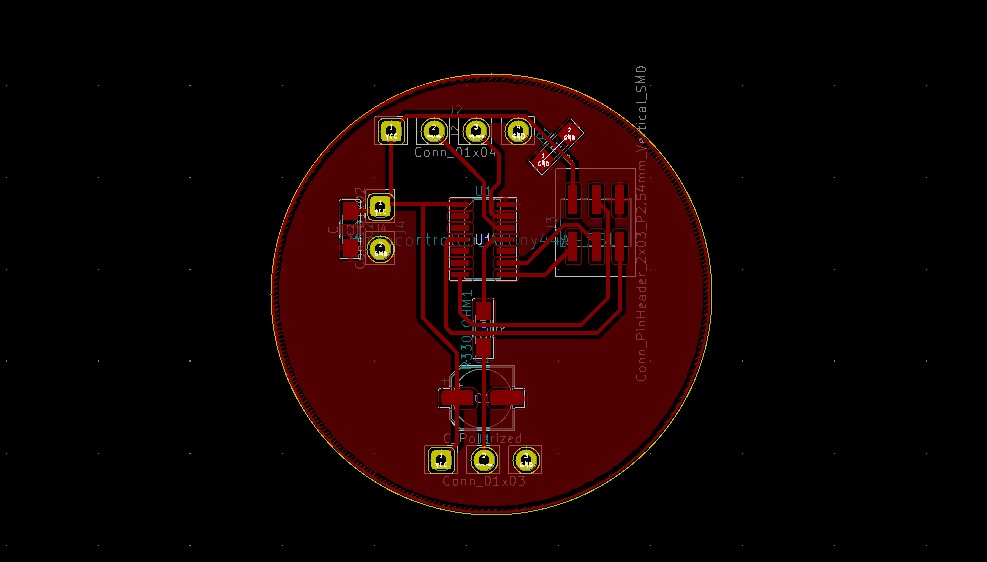 I’ve never programmed with a ISP programmer before, so I need to figure out how to do that first. My windows computer is also not great with discovering my programmer to begin with so I’ll just have to see as I go.

First I have to download the correct boards to ATTiny in the Arduino IDE: Preferences > Additional Boards Manager URLs and paste https://raw.githubusercontent.com/damellis/attiny/ide-1.6.x-boards-manager/package_damellis_attiny_index.json. Then go to Tools > Board > Boards Manager and type attiny, then install. You can then select the correct attiny from the boards list. I selected the ATtiny84 with an internal 8MHz clock because I found that value in the datasheet. Set programmer to USBtinyISP.

First error: “Serial was not declared in this scope” Serial like this doesn’t exist on the attiny84/85, so I need to use the correct equivalent which is SoftwareSerial or not use it at all. I decided to just get rid of it because I don’t need it for my actual board.

Henk told me to check my circuits for shorts, which I found; something went wrong with milling, causing my vcc and ground to be connected in the corner; and the big capacitor I accidentally over-soldered the vcc side to the ground as well.

To estimate power supply needs, multiply the number of pixels by 20, then divide the result by 1,000 for the “rule of thumb” power supply rating in Amps. Or use 60 (instead of 20) if you want to guarantee an absolute margin of safety for all situations. For example:

Notes on programming the attiny84

Then the next problem was that the neopixels would just all turn on bright white no matter the input; when connected to the power supply at least it would be less bright and only the selected neopixels would turn on (so if I said there were 60 instead of 68 they turn all on connected to my programmer, but when only powered by my power supply of 5 volt it would be fine). I found online (https://blog.adafruit.com/2016/10/28/tips-for-troubleshooting-neopixel-glitches/) that it’s probably because my power supply is too close to 4,7V (even higher) and my chip works better with 3.3V (but it’s 5.5V tolerant). However this wasn’t the issue according to Henk and it didn’t really make a lot of sense anyway since I hadn’t had issues with the previous Neopixel project like this. A bit more googling brought me to this stackexchange answer which turned out to be exactly what I was looking for. All I had to do was burn bootloader again with the new clock speed of 16Mhz and then upload. Then it works as expected!