This research is about finding hidden meaning in layered patterns, creating new meaning in collage and combinations of techniques and looking into the chimaera as a metaphor for image and identity. I study cellular automata to find logic in chaotic systems but to celebrate this chaos simultaneously.

more generally I use all kinds of software in different orders and manner to create new textures and textiles, with digital inspiration as well > on 2 levels digital

How do computer programs alter images? How far do you have to go until all previous connections have been severed? When do human symbols become computer symbols? How does the human eye interpret then the computer’s interpretation?

https://www.youtube.com/watch?v=Qmuf_6h7Kl8 USE PROCESSING TO GENERATE THE PRINTS INSTEAD !!! starting point should not be chaos because chaos is always just under the surface

can I make a gif on a dress? seemingly moving images

making it more about hiding messages and encryption in the textiles

The problem is that I am still creating the prints myself with the symbols and I want the computer to do this. I also cannot properly explain what I am doing, it doesn’t really make sense. There is also a gap between the prints I am generating and the methods I am using, the methods are not really adding another dimension to the project. So my methods and concept are not strong enough yet. 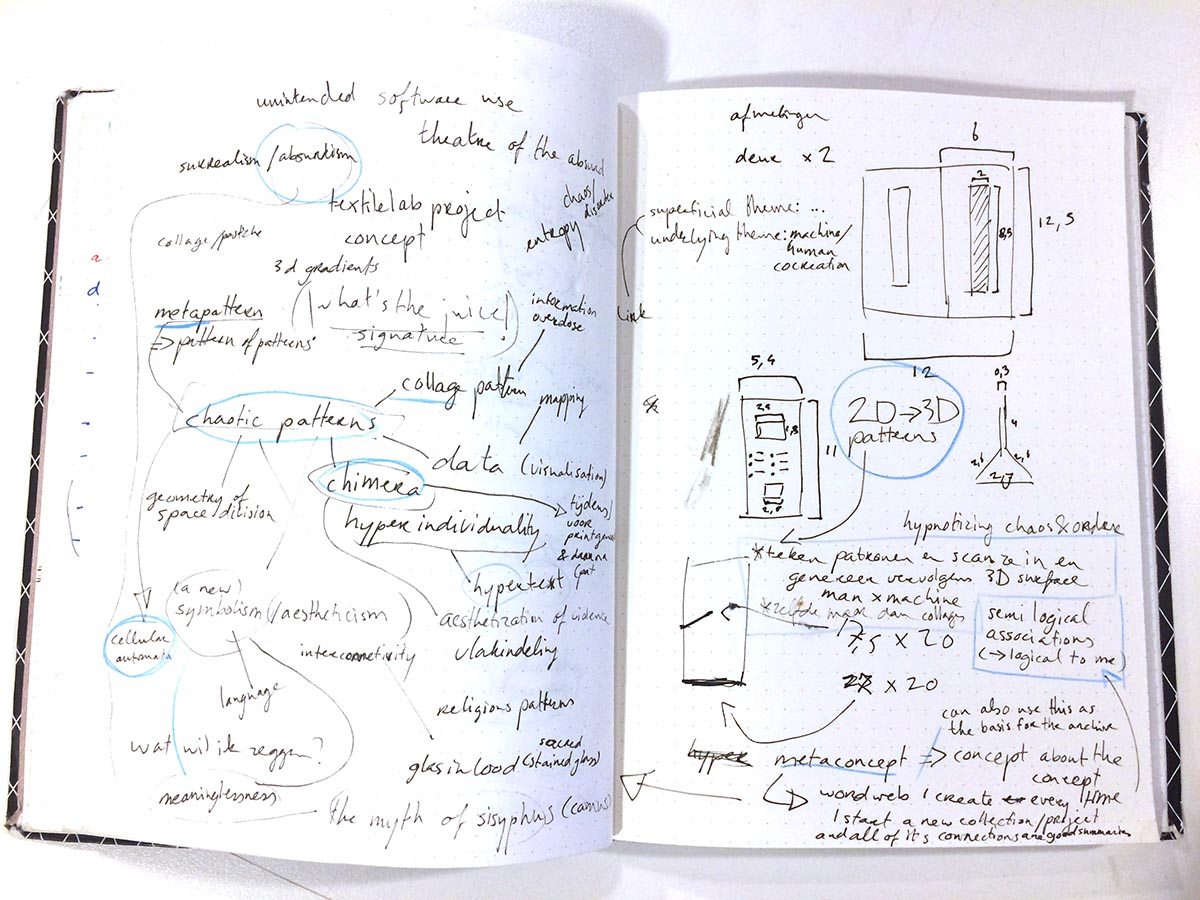 The Chimera fascinates me on both a mythological and a genetic level.

The Chimera according to Greek mythology, was a monstrous fire-breathing hybrid creature of Lycia in Asia Minor, composed of the parts of more than one animal. It is usually depicted as a lion, with the head of a goat protruding from its back, and a tail that might end with a snake’s head. It was one of the offspring of Typhon and Echidna and a sibling of such monsters as Cerberus and the Lernaean Hydra.

The term “chimera” has come to describe any mythical or fictional animal with parts taken from various animals, or to describe anything composed of very disparate parts, or perceived as wildly imaginative, implausible, or dazzling. Via Wikipedia

A cellular automaton consists of a regular grid of cells, each in one of a finite number of states, such as on and off (in contrast to a coupled map lattice). The grid can be in any finite number of dimensions. For each cell, a set of cells called its neighborhood is defined relative to the specified cell. An initial state (time t = 0) is selected by assigning a state for each cell. A new generation is created (advancing t by 1), according to some fixed rule (generally, a mathematical function) that determines the new state of each cell in terms of the current state of the cell and the states of the cells in its neighborhood. Typically, the rule for updating the state of cells is the same for each cell and does not change over time, and is applied to the whole grid simultaneously, though exceptions are known, such as the stochastic cellular automaton and asynchronous cellular automaton.

I used Golly to do some experiments with cellular automata.