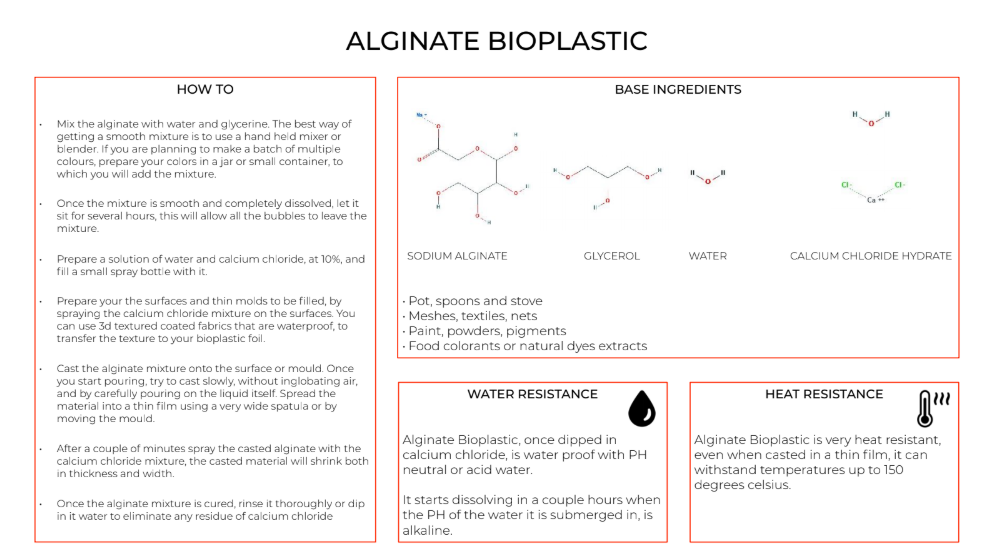 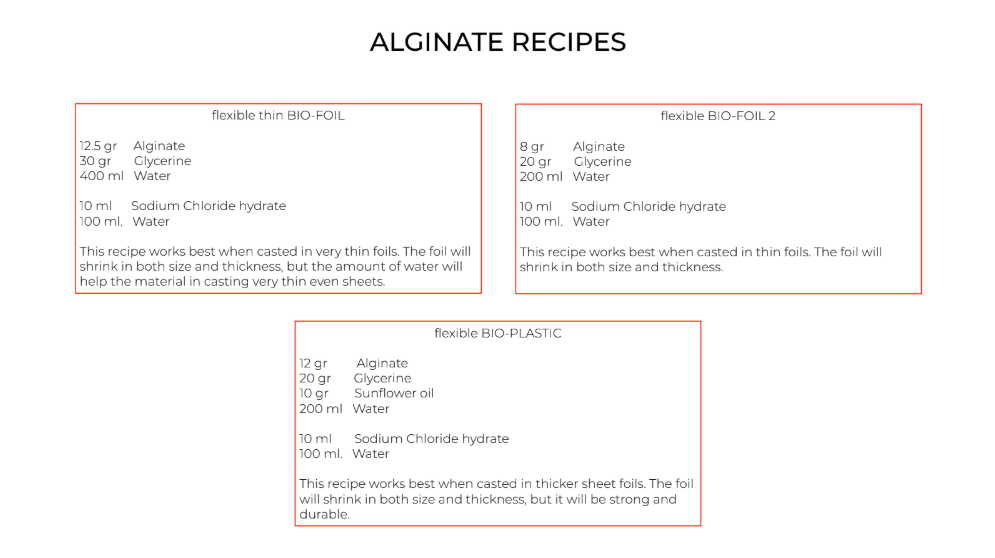 There was a jar filled with alginate mixed with water sitting in the textilelab since November 11th, so we wanted to see if it was still useable. It was very watery so Sarah did a test (casting a bit of the material and spraying it with sodium chloride hydrate mixed with water) to see if the alginate would solidify. That didn’t work, so we decided to see if we could evaporate the water by heating the mixture to 80 degrees celsius. We did three separate tests after about 10, 20 and 30 minutes. The first try the material could barely be picked up; the second and third try were a bit better but still not very satisfying. After about 55 minutes of heating I decided to just go for it, and see what happens when I cast the alginate mixture on a lasercut mold, spray it, add fabric on top and cast the last bit of alginate mixture on top of that and spray that. I also added some blue dye (alkanet mixed with alcohol made by Sarah). It was not a succes but hopefully some drying helps. 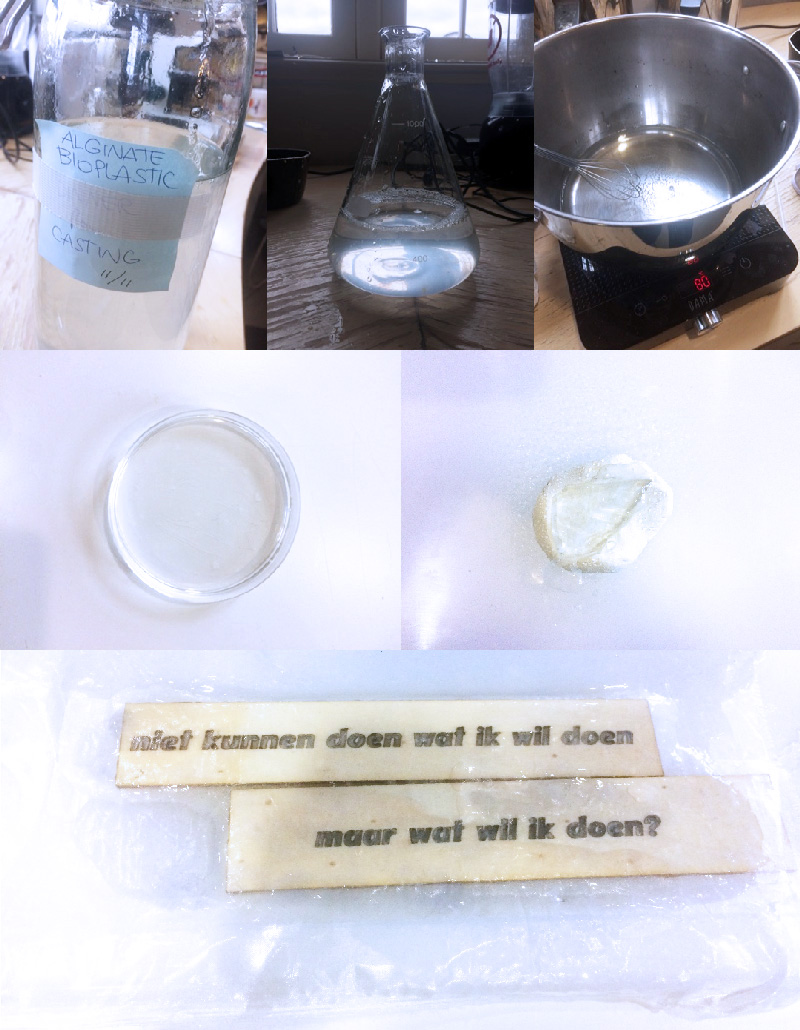 The see-through result is not very sturdy but quite nice: 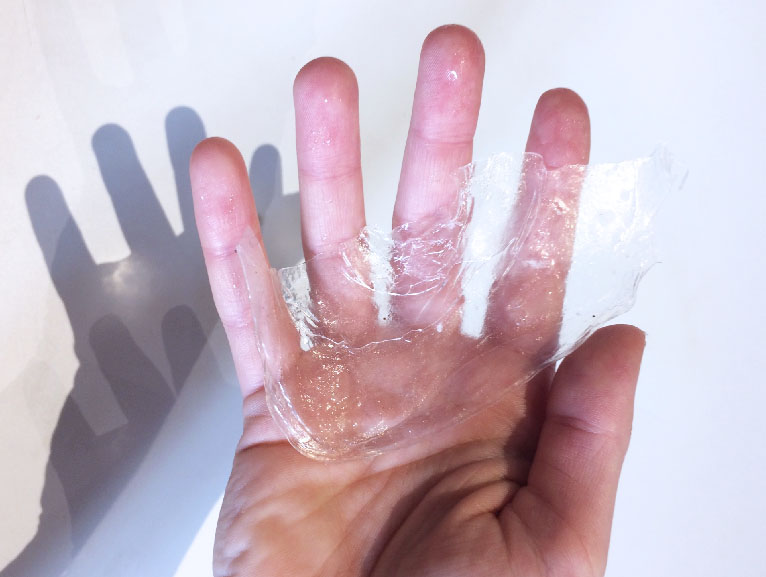 The recipe I used as a basis is the flexible bioplastic one. I also added some coloring: Sarah made a dye out of alkanet mixed with alcohol and sodium carbonate, which produces a magenta color.

Recipe for the spray to cure the alginate bioplastic:

Everything can be mixed using a blender: 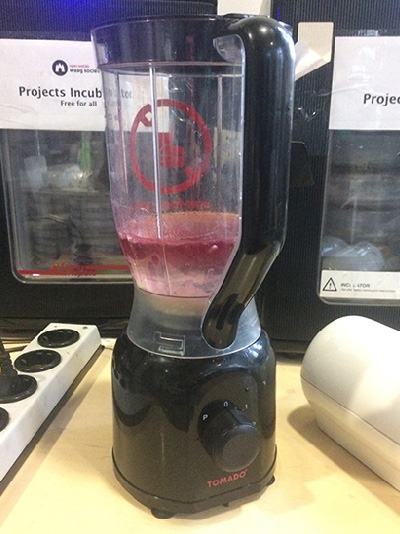 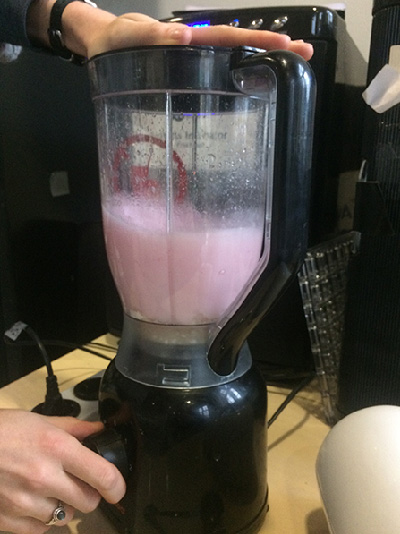 The final mixture is very thick (kind of like a strawberry milkshake): 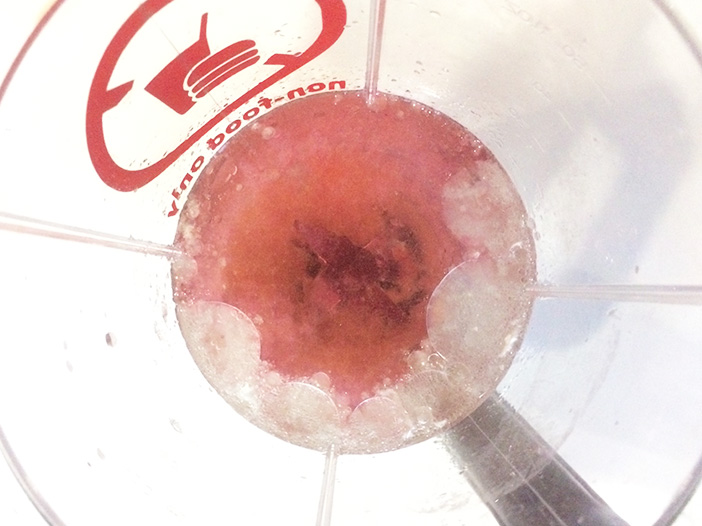 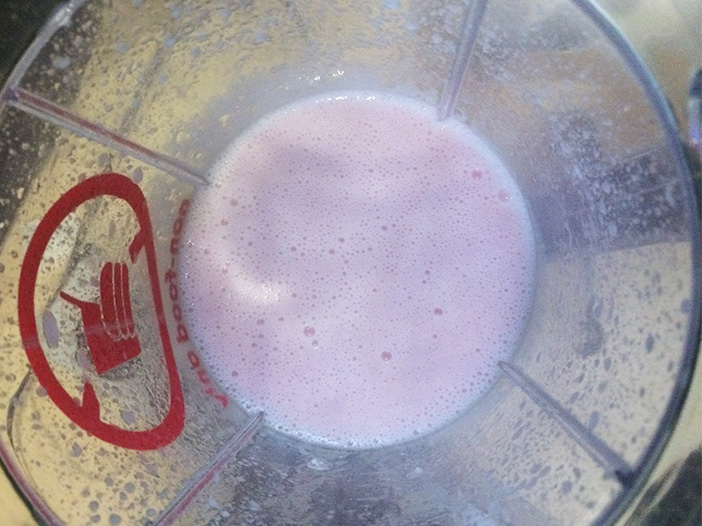 After a day of letting the mixture sit it looks like this: 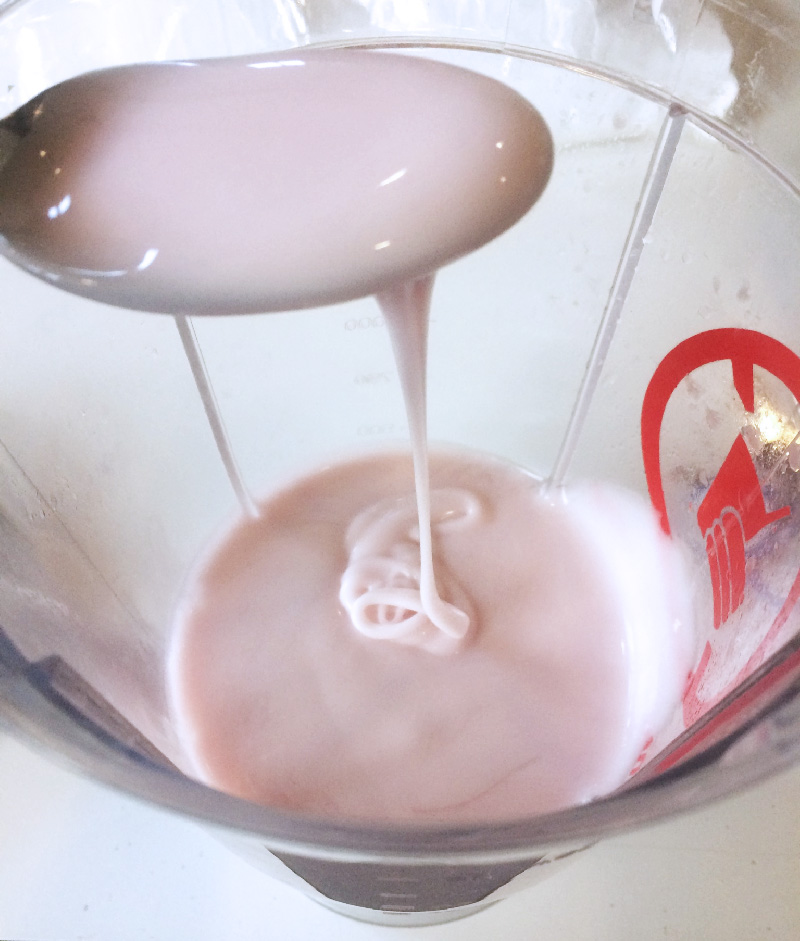 I cast it on some lasercut molds I made using diary entries of two of my friends as a source. 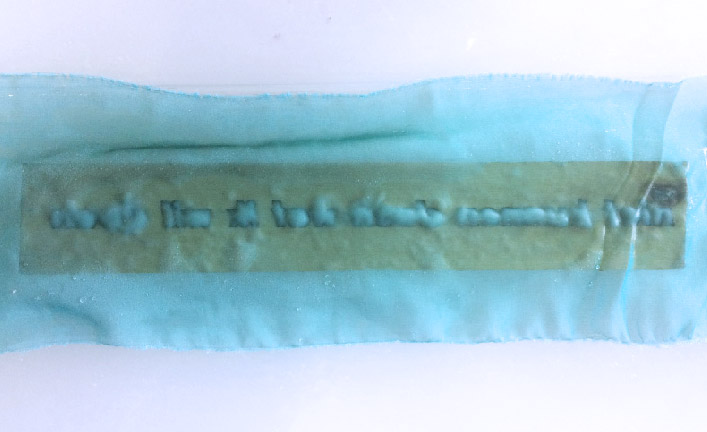 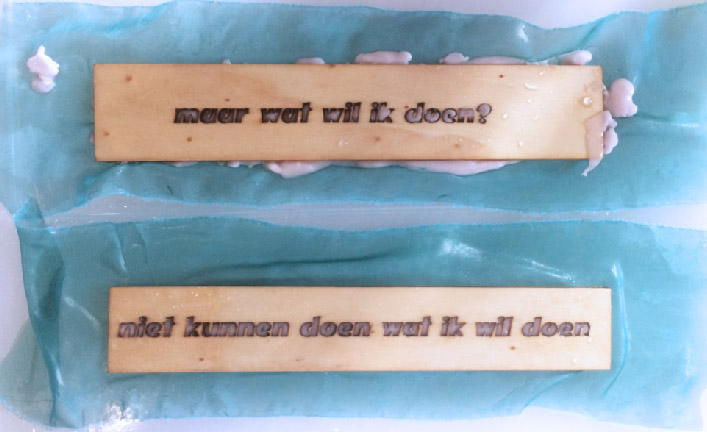 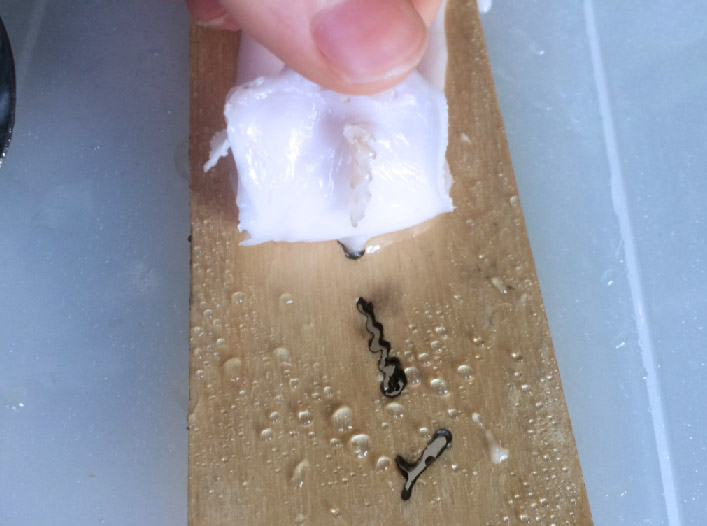 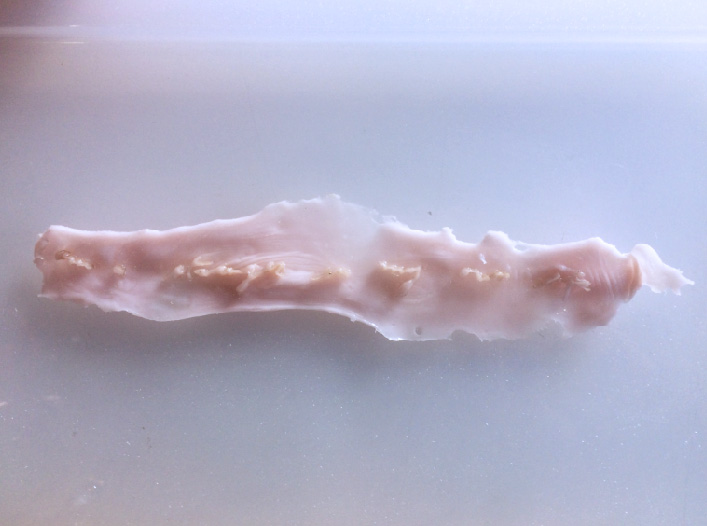 There is quite a bit of deformation on this bioplastic, especially visible on the teal fabric one that is cast a bit thicker than the other (the middle and right picture on the picture below).

When fully dried almost all of the color has gone. The plastic also has become slightly translucent.

The leftover words are quite legible and didn’t shrink very much. They are a bit brown from the burnt lasercut edges from the mold.

The following image is a good indication how much alginate shrinks. The color also transformed from a nice pastel pink into a kind of expired ham color. The other samples changed quite a bit in shape and color as well.

I also cast this mixture on my molded glove model which you can find here.

Initially I wanted to double the recipe and add alkanet dye, but I made a mistake and added gelatine instead of glycerine.

Because the glycerine shouldn’t have been there I decided not to let the mixture rest and just cast some samples to see what would happen. 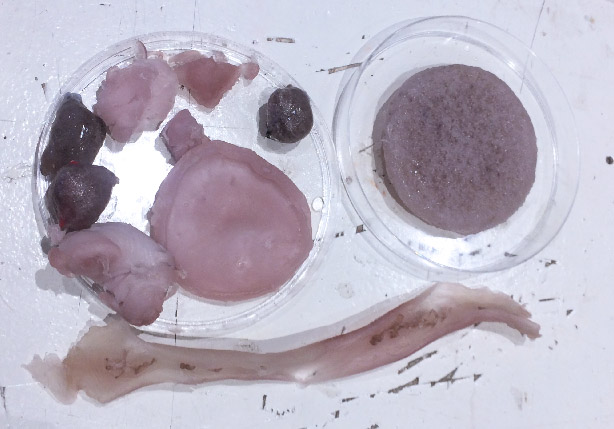 After that I heated the mixture in a pot to about 80 degrees Celsius because the gelatine was still solid. I cast a thin sheet for future lasercutting and a thick sheet for text molding. I also used a syringe to create thick bioplastic threads by extruding directly into a bath of calcium chloride.

Since gelatine is water-soluble and alginate bioplastic is waterproof, I wondered whether adding gelatine had any influence on the waterproof property. I did a test adding some threads to boiling hot water and let it sit for a few hours, but nothing happened other than the plastic becoming a bit more see-through temporarily so my conclusion is that the gelatine doesn’t decrease the water resistance. 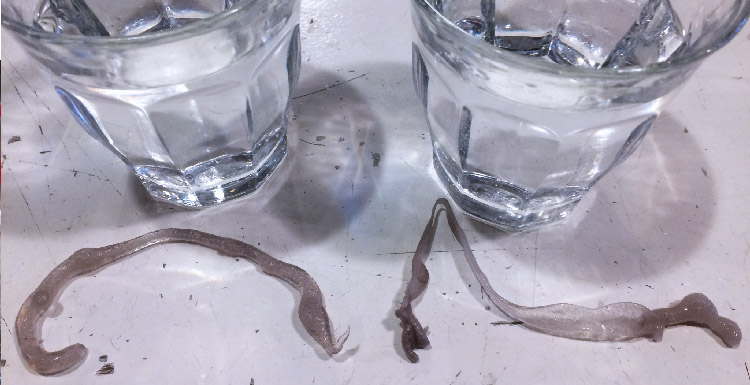 The biofoil turned out pretty nice, although there are a few bubbles visible (probably either because I didn’t let the mixture rest or because I flipped the material to spray the bottom). The text on the biofoil on the right is unintelligible at first sight but I like how it looks, it’s something that requires more effort to decipher. 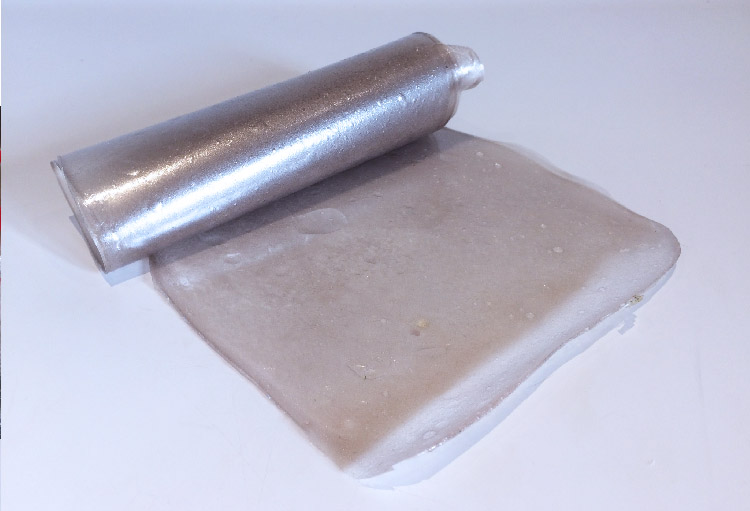 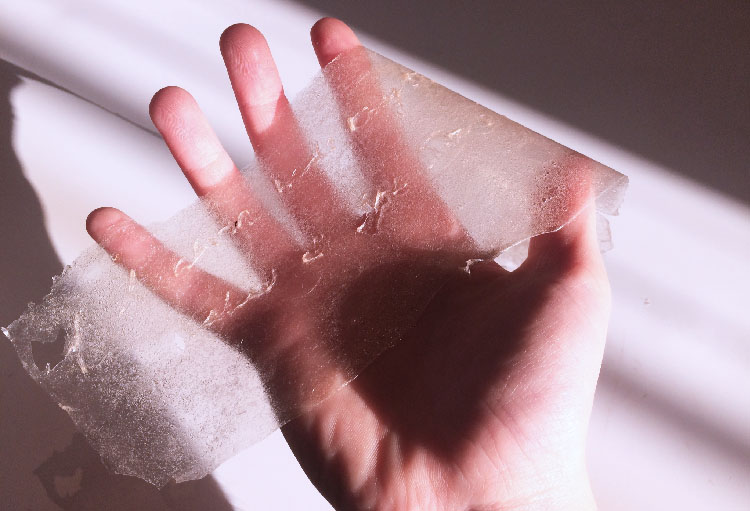 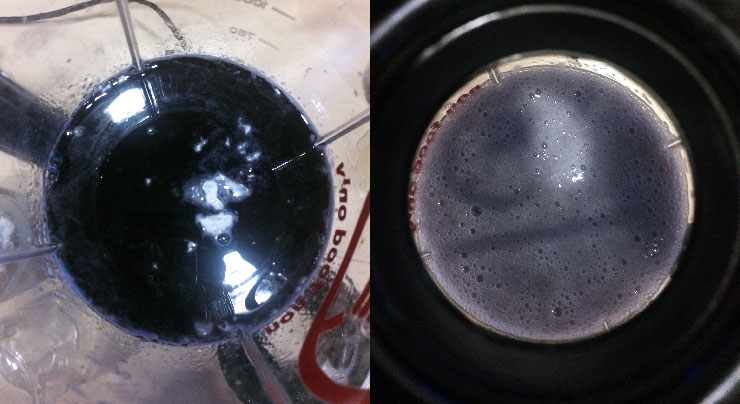 This is the biofoil recipe I used for casting on a mold, which I describe here.